I made a beeline for the Harrogate club's Italian Wars Sharp Practice game which had a bit of pre show publicity that had grabbed my attention.  Sharp Practice is a favourite at the club but in 28mm Napoleonics which for some reason don't really ppeal.


So I was straight into a game leading the forces of Venice against the dastardly French.  Sometimes the luck goes with me and sometimes against.  This was one of those games where I could do no wrong.  My right flank powered forward against the Swiss mercenaries and, with the help of a fortuitous double move and lots of excellent dice rolls, swept the Venetians to victory in no time at all. 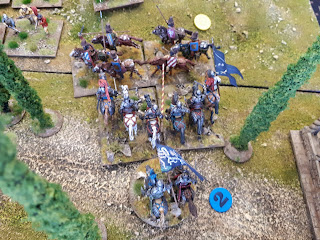 I then met up with Tim and had a quick look around the other games.  My eye was then taken by the Warploque Miniatures stand.  They have the ArcWorlde fantasy range of figures and rules.   North star miniatures had a sale just before Christmas where I had picked up the rules and a couple of warbands.  One of these was Elves and they can use an undead unicorn as an upgrade.  It is a really nice model and I decided to get it.


There was then a temporary evacuation for a security alert.  When I went back in and wandered around again I realised that there was an ArcWorlde participation game that I was able to join in.  My warband consisted of a Dark Warlord, 4 hobgoblins and 3 unusual creatures.  these had the ability to blow themselves up but then be very quickly reincarnated by the Warlord.  my opposition was another Warlord and a number of undead types.  This game was much closer but after many self inflicted explosions I scraped a victory. 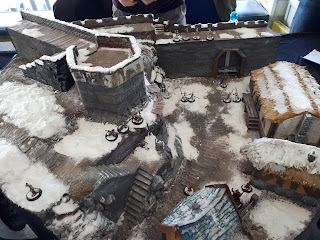 I then had a wander through the fleamarket but there was not much on offer and I thought that much of it was overpriced.  Another look around for a game was unsuccessful so I headed off to the bar with Tim and Kenny for a pint and a burger.  One pint turned into 3 and we were also joined by Doug and then Peter.  At about 2:30 I realised that the bus was leaving at 3 so dashed round for a couple of minor purchases and then it was back to the bus getting home about 8ish.


My thoughts on the show?
Trade - first class but not what I go for
Games - the 2 I played were excellent but there definitely seemed to be fewer of them than previous years
Fleamarket - too little space allocated and very little of interest on display
Venue - pretty good although the catering could be better (but that is true of almost every show)
What makes it a great event for me is travelling down with a load of mates


So another great day out