WarBattles – doing refights of all the battles in a war or a campaign with no restrictions on rules, probably against multiple opponents
Peloponnesian Wars – this is a mammoth undertaking which I very much doubt I will ever finish.  There are 50+ battles of which I have done 4 of the land ones so far and none of the naval.  I have a plan to do one of the Athenian naval raids using Dux Britanniarum so that might happen in 2014


Battles of Phillip II and Alexander the Great – with 5 battles done I am about a quarter of the way through.  The first was back in 1982 though!
1066 Year of Three Battles – only Gate Fulford to do to complete this


Henry VIII’s campaign in France in 1513 – ever since I read Cruickshanks book  I have wanted to game this campaign.  It is the only 25mm pre 1700 period for which I have been buying bare metal figures but unfortunately most of them have stayed that way. One game so far.
Scots Renaissance Battles – a book called Grampian battles aroused my interest in this  - I have so far only done Linlithgow Bridge though


The War of the Triple Alliance – an impulse buy of painted figures got me into this – no games palyed as yet
The Fleet Air Arm month by month – the plan is do do at least one game from each month the FAA was involved in carrier based air to air combat.  I just about have Mers el Kebir ready to roll.


Indonesian Confrontation – I was taken with Commando Miniatures figures and have managed to get some paint on a few figures – this is something for 2014.
Science Fiction in 28mm – I want to built a small generic force based on some of the Pig Iron figures


ACW in 15mm – for the Longstreet campaign – these actually don’t need a huge amount of work
Twinkles in the Eye – who knows whether these will ever turn into projects or not – I hope so!

Cyprus 1974 in 28mm – Greek Cypriot T34s against Turkish M47s.  If I could get my hands on some die casts at sensible prices I would buy some infantry and give this a go


Then there all my other toys (lots of 25mm ancients/medieval/ECW and 15mm Napoleonics) and of course I will get distracted by gaming other periods and campaigns, both using my own figures and others. The joys of being a wargamer eh!
Posted by David at 13:38 1 comment:

Email ThisBlogThis!Share to TwitterShare to FacebookShare to Pinterest
Labels: Projects

Can I first direct you to another report on our weekend event, with some more photos particularly of the Mad Mullah game

What was more exciting to me was that Craig, whose blog it is, also has a long standing interest  in the Wars of the Roses. This is one of the wars where I have the aim of refighting the battles.  In 1997 I did Bosworth and in 1999 the First St Albans and Blore Heath, all using WRG 6th.  I had planned to do Mortimer's Cross this year but have not progressed it as yet.

What is also great is that Craig has been trialling a period specific set of rules in Peter Pig's Bloody Barons.  Hopefully we can get a game in relatively soon.  Coincidentally on 7th October we have the author of a new set of WoTR rules called 'The Hollow Crown' is doing a demo game at the club.

Looking good for some interesting gaming!
Posted by David at 22:23 No comments:

Email ThisBlogThis!Share to TwitterShare to FacebookShare to Pinterest
Labels: A Hundred Years of War, Bloody Barons, Projects, The Hollow Crown, Wars of the Roses

This event, jointly sponsored by the Falkirk Wargames Club (FDWC) and Society of Twentieth Century Wargamers (SOTCW) has been long in the planning.  The idea was for members of both organisations, together with any other gamers with an interest in this period to get together for a day's wargaming.  It was held at the FDWC venue in Grangemouth.

There were two sessions in the day.  We had 3 games in the morning with 17 participants and 2 in the afternoon with 14.  The numbers were a little lower than I had hoped for (we could easily have coped with double the number) but that minor disappointment was more than offset by the universally positive feedback.

The morning games were a 1904 Mad Mullah battle hosted by the Bathgate club with their own house rules,  a WW1 air game using a playtest version of the second edition of Algernon gets it Off put on by SOTCW member Richard and a Bolt Action game that FDWC member Andy had organised.

In the afternoon Derek put on a 15mm Chain of Command game and there was a large Boxer game organised by another FDWC member, Mark.

All the games were very well received by those playing them.  I am hopeful of being able to make this an annual event so if anyone wants be involved in 2014 please get in touch. 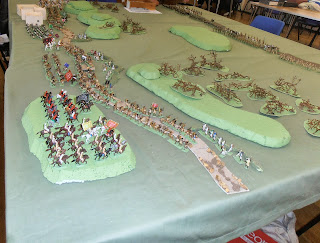 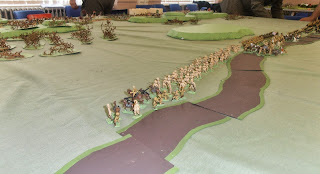 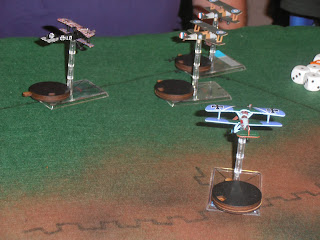 The German planes have the drop on their British foes 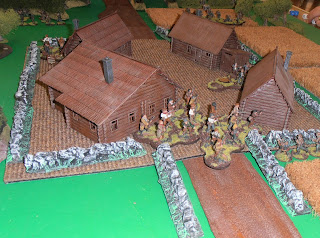 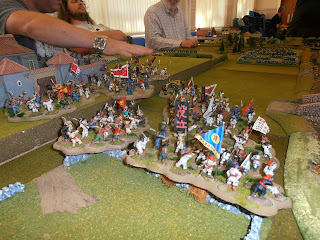 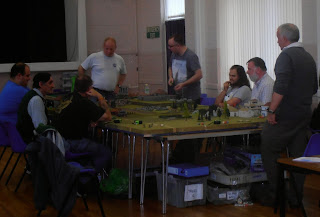 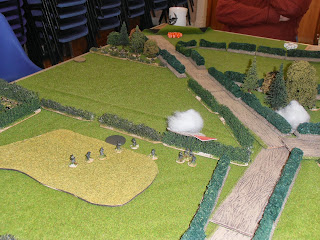 We were invited along to another 'meet the people' event today.  The Falkirk Big Roman Week consists of a number of events, walks talks films etc.  We were at Kinneil in Bo'ness which is the site of an Antonine Wall fortlet and has a small Roman museum.  The Roman encampment also featured re-enactors in the shape of the Antonine Guard and several other contributors.  The kids enjoyed dressing up and waving plastic Roman swords and shields around.  It is also the first time I have wargamed in a tent!

The main focus of our presentation was a Basic Impetus game.  The idea was that a Roman official had been dispatched from Londinium to inspect the army's progress in building the wall and he was also bringing the soldiers back pay with him.  The local tribe had caught wind of this and were intent on intercepting his coach.  It succeeded both as a game and as a draw for a number of interested spectators. Reversing the result in both the practice games the Coach made it to the local fort to enable the Romans to claim victory, although not before suffering significant casualties.

I did not take part in the game but instead set up the gladiator game  Ludus Gladaitorius - the idea being to show that wargames has a lot of variety to offer.  Although it was quiet at first two quite young brothers had a couple of games and seemed to really enjoy it and then two teenage lads also had a go.  Certainly worth doing.

All in all a pleasant way to pass an afternoon and promote both the club and the hobby.  We may get a further invitation to a WW1 themed event next year. 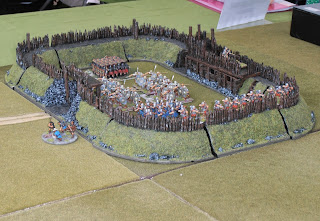 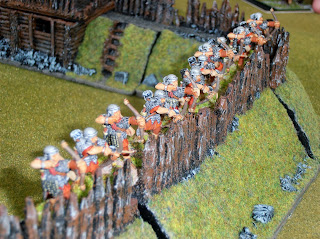 The Auxiliary Archers man the walls 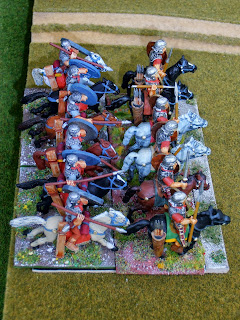 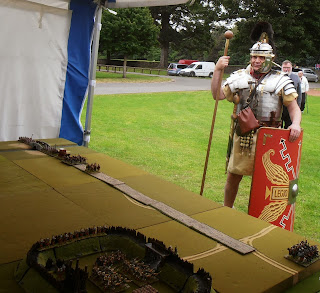 A re-enactor looks on 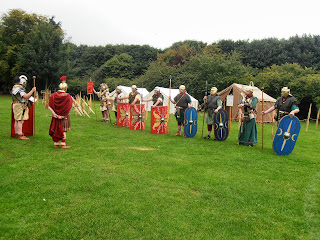 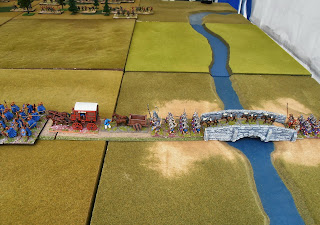 The coach and supplies head for the fort, with the barbarians in the background
Not quite the right order but you get the idea!﻿

Whatever is going on?

I don't do campaigns - in 30 years + wargaming only one in total until this last 12 months.  That one consisted of 4 battles against one opponent and took over 5 years to complete.

Most campaigns that I have seen first hand have started with a lot of enthusiasm and then very quickly fizzled out, hence the lack of appeal.  What I have done in place of campaigns is to work out and play scenarios for historic battles with aim of doing all the battles in a war or campaign.  That gives me freedom with timing and being able to play different opponents and rules.

Now I am in five campaigns.  How did that happen?  The first was a Dux Brittaniarum campaign against Richard.  We get to play at his house usually 3 or 4 times a year.  He was keen and I thought why not?  It will help string some battles together and as Dux Brit campaigns generally don't have a fixed ending anyway it will run its natural course.

The one campaign that I have seen run recently which was a success was the Mordhiem campaign run last year at the Falkirk club.  It ran through its set number of games to completion and looked a lot of fun.  I have always enjoyed Mordhiem and when Rory said he wanted to run it again this year I thought why not?  Ten games over a year is doable.

The next two are once again Dux Brit campaigns, this time with members of the Falkirk club.  See above for why not?

The final campaign is ACW using the Longstreet rules.  As with Mordhiem this will run for a set number of games.  I have not played theses rules but 15mm ACW is something I have not done much of recently. I have a fair number of figures and this will also give me a chance to reorganise them into some consistent basing.  So I thought why not?

My main worry now is how I will fit in all the other games I want to play.
Posted by David at 22:15 2 comments:

Many others have blogged today mourning the passing of this truly influential man.  I simply wanted to add my voice and pay my respects to a giant of the hobby.
Posted by David at 22:15 3 comments: