Tonight I had a couple of games  of Wings of War.  It is a simple WWI card based system using very nice die cast models.  Six of us flew a plane each.  In the first game my Rumpler managed to bag a Belgian RE8 and then limp home full of holes.  In the second some clumsy maneovering of my Albatros D V in  front of the guns of a British Camel proved fatal.

Nice simple gentle fun with not too much brain power required (or displayed in the second game).  Just the ticket!

Thats me up to 8 games now - a bit behind the pace for 70 this year but I hope to pick up the pace a bit as we move out of the winter months allowing me to get a bit further afield.
Posted by David at 23:43 No comments:

Email ThisBlogThis!Share to TwitterShare to FacebookShare to Pinterest
Labels: Wings of War

My opponent on Monday had said that he would be using  a post roman british army, so looking around at my collection and the new Extra Impetus books I had recently acquired I decided that my Carolingians could proxy for Ottonians.  Frazer thought that I had misspelt Ottomans so was quite surprised when I turned up with an army consisting of early knightly types and long spear.
The British were led by none other than a charismatic Arthur, which proved a good ploy as this resulted in Frazer keeping the initiative all night.  I deployed with foot in the centre and the knights equally split on either flank.  The British similarly had long spear foot in the centre with their better cavalry on their left flank, a large unit of Irish on the right and Arthur himself being charismatic in the rear.  I was marginally outgunned in the missile troops department.
The British advanced and I responded in the centre, keeping the knights back on both flanks.  They were classed as impetuous, but in Impetus you can automatically place them on opportunity at the start of the game and keep them in place, otherwise they make straight for the enemy.  The plan was to engage with the foot in the centre and then take the knights off opportunity and throw them  in.  It was probably a good plan but I ignored it and charged forward with all 6 units of knights.
This sort of worked on my right where, after a scare when my general’s unit was taken in the flank,  I was able to take out several units.  However a pesky unit of archers held out on a hill for 3 turns which was long enough to make that success irrelevant.  My left flank knights were ground down by the opposing spearmen and my spear foot took too long to get into contact.
However, just as my army was approaching break point Arthur decided to personally deliver the coup de grace and charged into the fray.  His unit took a casualty and on the xxxx Frazer threw a six.  When this happens there can be all sorts of dire consequences including death of the general and the rout of the entire army.  My celebrations were soon cut short when Frazer rolled snakes eyes and Arthur escaped with a flesh wound.  My army crumbled to defeat soon afterward.
All in all a fun game and a good reminder for me on the do’s and don’ts (particularly the don’ts) of Impetus play.  What was also great was the number of games the club had going.  We have recently attracted a few new members and I think this week was the busiest it has ever been in the 10 years I have been a member of the Falkirk club.  Long may it continue. 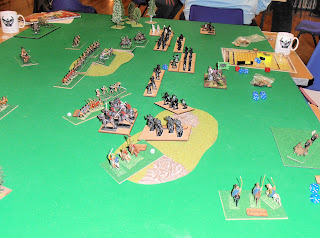 This was the point where my general was caught in the flank.  He survived, but you can see the 'pesky' archers about to take position on the hill for a heroic last stand.   Note the FDWC mugs!
Posted by David at 19:08 2 comments:

Bush Wars by Force on Force

Just ordered off Amazon - release date in May

I have been looking for a 'modern' theatre of operations where I could model both sides in 28mm without needing a huge amount of stuff.  A what if set up in Belize (UK v Guatemala) or the Indonesian Confrontation have both been on my radar but Africa might also work.
Posted by David at 08:12 2 comments:

Email ThisBlogThis!Share to TwitterShare to FacebookShare to Pinterest
Labels: Force on Force

On Monday I had my first Impetus game of the year.  As usual my prep time was non existent so I decided to use the French Italian Wars army that I had lent to Doug for the second of the two competitions we played in last year.  The list was already done and I knew which boxes I needed to pick up so all it took was a quick trip to the attic and I was ready.

Then again I suppose it depends how you define ready.  Not having played for a couple of months I found my grasp of the rules less than perfect.  It did not help that I had never even heard of my opponents.  Google  is my friend and I found out that they were a distinctive racial group who had occupied the northern part of Japan before being conqueredand assimilated into the wider population.

In Impetus terms they are just about the perfect light cavalry army.  That was always going to be a challenge for my Pike Blocks and Gendarmes, although the Harquebus units did provide some compensating firepower.

So the Pike trundled across the table and got pretty much shot to pieces.  The Gendarmes and the Archers (Heavy Cavalry rather than missile troops) did a good job on the left flank and even managed to catch and rout a couple of the better horse archer units.  In the end the Emishi only just managed to get the victory points for an outright win although there was never any doubt as to which army held the advantage.

A really good learning experience and a lot of fun.  Our table attracted a bit of a crowd towards the end who provided some noisy moral support to my troops.

I remembered the camera but forgot to take any photos!  That's game 5 now, so I need to up the pace a bit if I am going to hit my target of 70 for the year.  Another game of Impetus is planned for next week so watch this space.
Posted by David at 20:57 No comments:

Email ThisBlogThis!Share to TwitterShare to FacebookShare to Pinterest
Labels: Impetus

A very romantic valentines day gift arrived today from Itay.  My wife had bought me Impetus 1, 2 & 3 so now I have the complete set.

Who said Romance is dead
Posted by David at 19:07 1 comment:

A weekend visit this time – the weather was not too great so the shots are a little gray.

is close to Uddingston  and a few miles south-east of  . It was started by Walter of Moray in the mid 13th century but he did not do much more than complete the keep. However even in it’s unfinished state it played a major part in the Anglo Scottish wars changing hands several times.   Most interesting was the siege of 1301 when a large English force took the castle using all the classic siege equipment such as mobile towers, trebuchets etc.  It was also used as a base by Edward III in his invasion of in the 1330s.

The family acquired the castle in 1362 and rebuilt it transforming it into a major seat of their power in the region.  It did not see any further significant military operations


A cellar houses an interesting display of the military role of the Caslte and in particular the siges with an impressive collection of trebuchet balls.
The Castle is in the care of Historic Scotland.  If you have dogs they are allowed in and there is a good walk around the outside 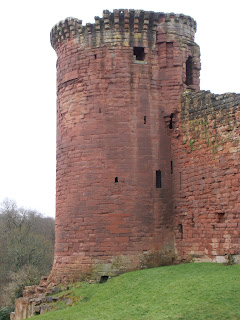 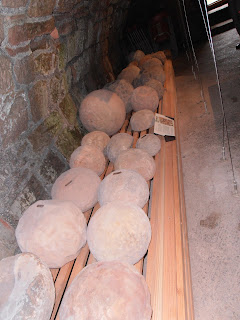 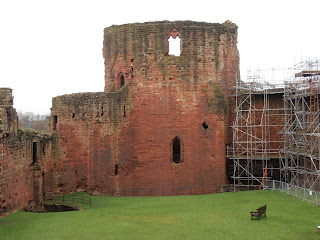 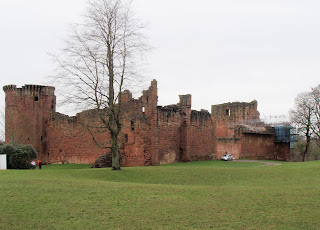 A general view of the castle from the car park
Posted by David at 10:29 1 comment:

Email ThisBlogThis!Share to TwitterShare to FacebookShare to Pinterest
Labels: Castle

Looks interesting - it's the middle one of three programmes which look as if they focus on the importance of logistics in warfare.  If it's any good I should be able to catch the first one on I-player

Apologies to my non UK readers
Posted by David at 17:51 1 comment:

Email ThisBlogThis!Share to TwitterShare to FacebookShare to Pinterest
Labels: TV

WWI Germans and a contribution towards the painting thereof by Marco

WAB Ancient Battles 2 - what a monster of a rule book

Plus a couple of non wargaming books, music and my favourite 90% chocolate

I have agreed to arrange the first of what are hoped to be five Impetus events in in 2012.  This will be held on Sunday 22nd April at the Newlands Community Centre in Grangemouth which is the normal meeting place of the Falkirk & District Wargames Club.
I call it an event rather than a tournament because although it will count towards the Impetus world rankings these are intended to be relaxed affairs where Impetus players from across Scotland (plus anyone from further afield who wants to participate) can get together for some friendly games against different opponents and armies to those they would normally face in their home club. Impetus novices are welcome and won’t feel out of place.
There were two Impetus events in in 2011 which I took part in and found to be very enjoyable despite my lack of experience with the rules.  We have developed a system to underpin this philosophy which worked well last year and has been carried forward into 2012.  Armies from the full Impetus period are allowed but the players are divided into groups to match them to the closest historical opponents available.  These are then tweaked to spread members from the same club across the groups to try to avoid them playing each other.  In the 2011 competitions the groups were of four which enabled historical(ish) round robins to be played in each and everyone had at least 2 games against players from outside their club.  Terrain is fixed throughout to offer advantages and challenges to different types of army during the day.
Further details will be posted on the Impetus forum at http://impetus.forumsland.com/impetus-about3161.html  which is also where you can sign up.  If any Society of Ancients players are taking part and our paths cross, how about making it a Society of Ancients Championship game as well?
Oh and why Antonine’s Folly?  Well as the organiser I gave myself the naming rights.  The path of the Antonine wall passes within a mile of the venue so there is a strong local connection.  It was only manned for some 20 years between 142 AD and 162 AD (briefly reoccupied in 208 AD) so to me that seemed to be the ancient equivalent of a folly.  I liked the sound of it and could not think of anything better, so Antonine’s Folly it is.
Posted by David at 19:30 4 comments: