The Lord of the Rings (or Middle Earth if you prefer) Battle Companies campaign has now kicked off.  In it's early stages numbers on the table are quite low and games over rather quickly so we easily managed 3 games on the first night.


My Rivendell Elves proved to be quite tough nuts to crack.  First up were Kev's warg riders who are a bit weak.  Having  discounted any possibility of success he very quickly took down 2 of my guys, but after that lost figures pretty quickly for an elf win.


I was able to recruit an additional warrior for my next game which was fortunate as one of my casualties had to sit out a round.  Next up were Kenny's Easterlings who were as heavily armoured as my elves.  We din donged backwars and forwars for a while but I was able to complete my mission and assassinate his leader


For the last game I was faced with Rory's Arnor.  Rory is running the campaign and has written 5 scenarios of which this was the first -  The Crossing of Emyn Sul.  The objective was a ruined tower and 4 outbuildings.  One contained a hideous fiend (can't remember it's name!) which would attack any who came close to his lair.  In fact Rory took it out quite quickly.  I was rather worried by being outnumbered by archers 4 to 1 and indeed mine was soon shot down.  I was however able to close without further mishap and win the day. 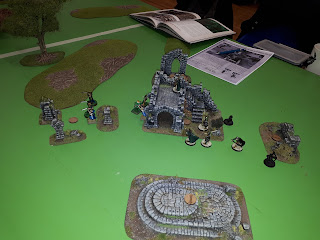 The two warbands close on the ruined tower

I am not sure how the campaign will play out.  Games will get longer as warbands get bigger, but there is a worry that those who did not do well early on will struggle to compete in the later stages.  We will have to see how things develop.

We had a lot of snow last week and although it is starting to clear our planned Monday night game was somewhat curtailed as the organiser, Tim, has boiler problems and had to wait in for an engineer.  The plan had been to fly big bombers in Wings of Glory.


I was not quite sure who else might be expecting to play so I picked up my modest box of  planes before heading out.  The answer was no one else who made it in!  However the other Tim had come down to pick up a couple of books and agreed to have an introductionary game.


We played the simplified version that the club uses for public participation events where we ignore all shooting effects other than points of damage.  Both games were quite short as we manoeuvred into position and exchanged shots Tim was unlucky enough to draw the Boom card signifying instant destruction on both occasions!

Email ThisBlogThis!Share to TwitterShare to FacebookShare to Pinterest
Labels: Wings of War

Any regular followers of this blog will know that I always have a number of slow burn projects on the go, most of which crawl along at a snail's pace if at all.  However I can today announce real progress with HOTT and Jason and the Argonauts.


I have completed the Gegenes who were Jason's first foes.  They are described as multi-limbed wild men but such figures are hard to find and have limited alternative uses.  A compromise was to use cavemen.  24 figures each mounted on 30mm square bases makes a HOTT army and allows other uses.  Some have already appeared as barbarians in Broken Legions.


Now 24 figures may not seem that many but I honestly cannot remember when I last bought that many figures bare metal (these are Copplestone) and painted them up.  It may be decades. My painting standards are not very high but they are table ready.  Now I just need to finish the Argonauts! 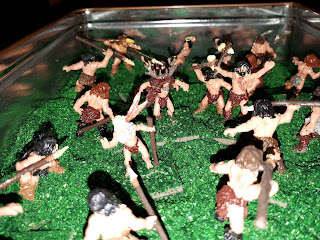 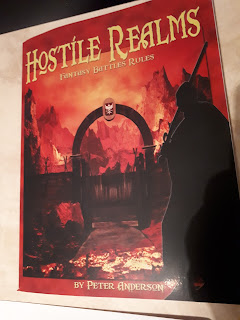 When I went on a buying frenzy of Piquet rules before Christmas the fantasy version was a little bit of a left field pick.  Piquet is very different to any of the Fantasy system that I have played and although Tim, the clubs Piquet guru, will play I don't think his interest will extend to buying any armies.

My plan is to make this another of my many slow burn projects.  If I can get my Elves painted up I should be close to being able to field both High Elf and Wood Elf armies with a smaller Dark Elf force.  In the meantime I will keep an eye out at Bring and Buys for painted and inexpensive reinforcements.  If necessary I can pad the armies out with some allies.  Once done I can hopefully have a couple of games with Tim and take it from there.  ﻿