Now on sale on our website testofresolve.com it covers 8 battles in the latter half of the Wars of the Roses namely Hedgeley Moor, Hexham, Edgcote, Empingham, Barnet, Tewkesbury, Bosworth and Stoke Field.  Lots of fun to playtest and it is great to be able to offer it up the the wargaming public. 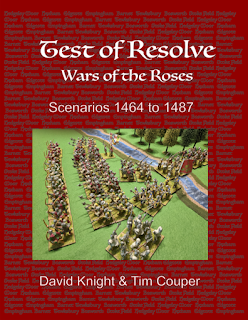 First time back at the club since February 2020

We actually opened on the 21st but it was my first visit this Monday.  We are operating a fairly strict set of protocols in line with Scottish Government advice and a lot of members are not wanting to return just yet but it was good to see 7 of our 8 available tables with games on them.

I played 7YW Rebels and Patriots using a scenario from the Sugar Islands campaign book.  I took the French and led the defense of Madame Ducharmety's plantation on Guadeloupe.  The redoubtable lady's force was largely made up of armed slaves who provided a determined resistance to the British regulars but after a  brisk firefight a highland charge stormed the hill and she she was wounded and captured.

Thanks to Doug for the game.  Perhaps I will remember to take pictures next time.

Launch of Test of Resolve - Wars of the Roses 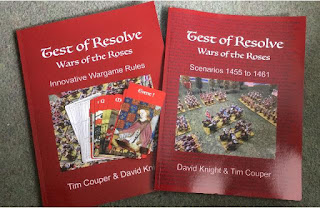 It has been quite a journey but myself and Tim have now published our first set of rules together with a scenario book and printed game cards. Some links for more information are below
We did a Youtube interview to mark the launch
EXCLUSIVE: Test of Resolve - New Wars of the Roses wargaming rules released - YouTube
Peter, one of our playtesters, did an in depth run through of a game of Stoke Field which explains how the rule mechanisms work
Blunders on the Danube: Test of Resolve Playthrough - Stoke Field, June 16, 1487
If you are on Facebook you might want to join our group
Test of Resolve Wargame Rules | Facebook
Also a link to our website for more information and to makes purchases
testofresolve.com
The softback books are available worldwide from Amazon but the PDFs and cards only direct from us
Posted by David at 01:15 8 comments:

Wargaming the Sudan in 15mm 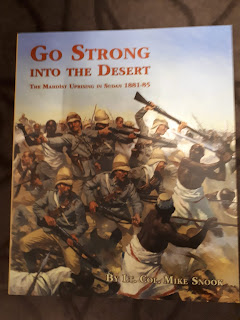 I bought 15mm armies suitable for gaming the Sudan a few years ago and with the above volume now in my possesion I can plan some games for when the club open again I need to expand the collection a bit to do full scale battles but I will start with some scenarios for The Men Who will be Kings
Posted by David at 18:20 2 comments:

Email ThisBlogThis!Share to TwitterShare to FacebookShare to Pinterest
Labels: Sudan

Something for later in the year once we are gaming face to face again. I am hoping to do linked scenarios for Jason and Argonauts using Hordes of the Things which is from some Slingshot articles a few years ago. Also an Arthurian quest – dark ages vibe rather than medieval – from Songs of Arthur and Merlin. Games are relatively short so 2 a session swopping sides would be the aim. Just some painting to finish off and I need a Giant and a Witch!
Posted by David at 11:15 6 comments:

With Tim publish Test of Resolve - Wars of the Roses and scenario booklets covering all of the battles, earlier in the year rather than later. If things open up we hope to demo the rules at shows and clubs. Play 100 games, zoom, clubs and shows Do a bit of painting and organising, but anything over and above the above would be a bonus.
Posted by David at 13:14 4 comments:

Email ThisBlogThis!Share to TwitterShare to FacebookShare to Pinterest
Labels: 2021 plan

Not at all as planned 17 face to face games up until March After that 70 zoom games and 2 PBEM 89 was not a bad score for games played considering. The zoom games were all run by Tim and were all Wars of the Roses battles. We have developed a set of rules titled Test of Resolve - Wars of the Roses which have been in development for most of the year and are now getting close to compeltion. More to follow on the rules and associated scenarios. It has been a huge amount of fun developing them and playing many of the historical battles to playtest them. It has pretty much kept me sane this crazy year. Not much else to report. Vapnartak was a good day out and my only show of 2020. The flea market style bring and buy is much improved but for the first time ever I did not manage to get a game which was a shame. Some painting progress but that tailed off in the second half of the year. 2021 plans to follow
Posted by David at 14:12 9 comments: