Rory and I got out the old WAB El Cid armies for a game of War & Conquest.  Our only other attempt at the rules was about 4 years ago! I took Andalusians with Christian allies with my opponents being Berbers
Catching up with my blog posts so keeping this one short.  Suffice it to say that we spent quite a long time thumbing through the rules and the devastating charge unleashed by my knights was much more effective than I ever expected.  We will try these rules again shortly 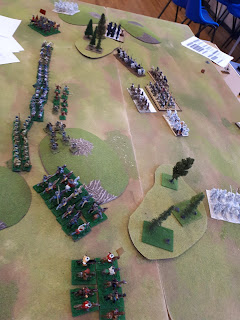 When playing Ball and Chain a couple of weeks ago a new member, Doug Smith, introduced himself.  His background was in RPG but he was interested in getting into wargaming with ACW at the top of his list.


One of my opponents (confusingly another Doug) has an extensive collection of 15mm ACW and agreed to put a game on.  He organised and umpired it - I took the Confederates against Doug and Tim as the Union.


The battle was essentially a holding action.  I had 3 good quality regiments and 2 batteries against 5 Union regiments and 4 batteries.  Confederate reinforcements were potentially available (but never arrived) 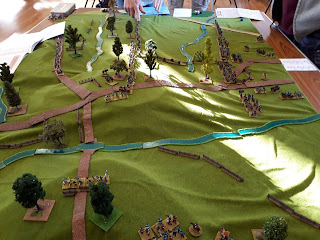 
Initially I just had 2 regiments and 1 battery deployed, the other regiment and battery were actualy heading away fro the fighting.  It took some time to get them turned and back into a useful position, not helped by a couple of low dice rolls and a tardy result.


The Union infantry just kept on coming on with a few shooting casualties taken, mainly by my forces.  One of the few differentiators between Confederate and Union forces is a +1 on a Confederate charge known as the Rebel Yell.  Given that I was outnumbered by almost 2 to 1 in any firefight I decided to throw caution to the winds and charged at every opportunity.  It was then essentially a dice rolling exercise - I won the first one but then lost the second 2 combats.  As I attempted to steady them one of my regiments gave up the ghost and at that point I conceded.


A fun night of ACW - thanks to Doug for putting the game on and Doug and Tim for being sporting opponents.
Posted by David at 11:05 No comments:

Email ThisBlogThis!Share to TwitterShare to FacebookShare to Pinterest
Labels: Fire and Fury

The second leg of our Road trip took us to Matlock in Derbyshire for my first Saga 2 Iron Man tournament.  I did 3 of these last year, including one at the same venue hosted by Dales Wargames WRG held at the impressive Whitworth Centre. Numbers were once again down a bit at 8 but still plenty to allow 3 good games.
We got a bit of an introduction to the changes from Saga 1 at the start.  There are lots of differences but the fundamental feel of the game is unchanged.
The tournament system is prey straight forward.  Richard provides all of the armies and the players rotate around the table using different armies and fighting different opponents each turn.  To win the competition the important thing is to kill as many of the opposition as possible - own losses are irrelevant.
My First game was Picts v Late Romans against Andy Lyon, who had done a lot of the introduction to the changes and knew the rules pretty well.  A proper gentlemen he kept me on the straight and narrow and took any pain out of my first game with  new rules.  He beat me fairly convincingly but I did manage to pick up a few points and pointers. 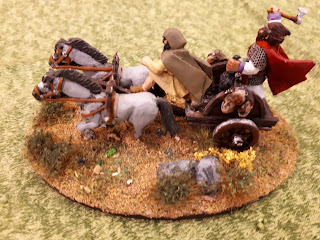 Pict general - the only photo that I remembered to take


My second game was Scots v Vikings against Kieran Matthews who was the youngest player there and perhaps lacked the killer instinct of some of his opponents.  I was able to press him quite hard and almost wipe out his warband for a comfortable win.
My third game was Byzantines v Pagan Russ against Colin Alcock who I played at an Iron Man 1 event in 2017.  This was a real ding dong affair as the balance of advantage continually shifted.  By the end of it neither of us had many troops left but I had just shaved the win.
Overall I came 4th out of 8, not a bad result when I was 7th after the first game.  Thanks to the organisers for putting on an enjoyable event.
So what was my impression of Saga 2?  It is a natural progression from the original rules.  Some minor issues have been dealt with which marginally improve game play. Other changes are rather more superficial. It allows expansions into new periods which many will like.  So marginally better but I will still be happy enough to play the original version.  Personally Saga 2 does not offer enough for me to make the financial investment in the rules and supplements at full price.  If I can pick some up cheap at a bring and buy I may be tempted.  I will however happily play any other Iron Man events that I can get to.
It was a much better drive home, cooler and less traffic.  I do enjoy a good wargaming Road Trip!!!
Posted by David at 18:38 No comments:

Email ThisBlogThis!Share to TwitterShare to FacebookShare to Pinterest
Labels: 2018 plan

I have been an intermittent member of the Naval Wargames Society for a while now.  I don't actually do that much naval wargaming but find the history fascinating and definitely would like to do more.  The annual weekend that the Society hosts has long been on my to do list but the previous venue in Gosport was just too far from Falkirk.  The new venue at the Fleet Air Arm Museum is actually still a pretty long trip but I decided to give it a go this year.


Unfortunately I had to be back at work on the following Monday morning so I was only ever going to do the Saturday.  However there was also a Saga Iron Man 2 tournament on Sunday near Matlock so I decided to go for a road trip.  Originally the plan was to drive down on Friday, stay locally, drive up to Derbyshire on the Saturday night and then home after the tournament.  My wife is very supportive of my hobby but was a bit concerned at the amount of driving involved so we changed plans.  She also came down, as did our dog, and we drove down a day early to have a day together in Somerset on Friday then plan as before.


The extremely hot weather was difficult particularly on the drive down.  We needed regular stops to give the dog some air and roadworks made it an 11 hour trip.  Two drivers was definitely a bonus. On Friday we spent most of the time at the beach keeping Beau (our Patterdale/Labrador cross) as cool as possible.  Our hotel, the Ilchester Arms, was very good, extremely dog friendly, and less than 10 minutes away from the Museum.


I was initially a little disappointed at the event as numbers were quite low, probably as a result of the change from an established venue.  However the games were excellent.  First up was, rather surprisingly to me, a Wings of War game.  David Manley has added in rules for motor launches using the same mechanics as the air rules.  Myself and Phil (I hope that name check is correct) each had a Sopwith Baby seaplane and a motor launch and were tasked with capturing or destroying an immobile surfaced U Boat.  German air cover was provided by David and Simon each with a 2 seater seaplane - can't remember the type.


It was actually quite a hard task as in Wings of War 2 seaters can be pretty deadly as they effectively shoot all round  and they were also more robust than our aircraft.  Things were not helped when Phil drew a Boom Card (instant explosion) and lost his Baby early on.  To even things up a Camel was drafted in to bolster the British forces.


Much manouvering and drawing of damage cards ensued but eventually all the British forces were destroyed for the cost of one of the Germans.  Phil's motor launch was nearly able to get in range to make a torpedo attack on the U boat but he just could not quite make it. 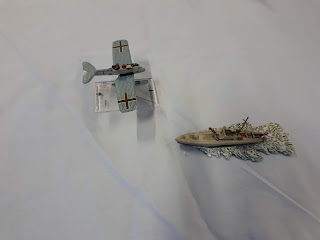 My Motor Launch being attacked by a dastardly German floatplane
A bonus was entry into the museum which is well done with many FAA aircraft on display and some excellent models of aircraft carriers.  Worth a visit - we went round rather quickly in an hour but 2 hours would have been enough for a more leisurely stroll round. 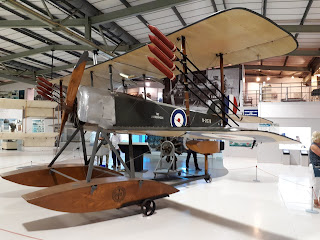 A real life Sopwith Baby armed with anti Zeppelin rockets
The afternoon game was a recreation of the Naval attack on Zeebrugge in WW1.  The aim was to get blockships to the lock gates and render them inoperable thus depriving the German Navy of a U boat base.  I was responsible for Monitor fire, air raids and a submarine filled full of explosives used to ram an access route which were all part of the general bombardment/diversion whilst the main attack went in.  I had to leave before the end but I understand one ship managed to fight it's way all the way through to the lock gates and allow us to claim victory for the RN. 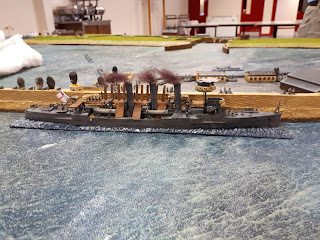 HMS Vindictive at the mole
I enjoyed the day but it was a long way to travel so it may require a longer break to allow me to do this again. Still a road trip is always fun and it can't get this hot every summer can it?


(report on second part of the road trip to follow soon)

The latest round in the club's Battle Companies campaign was very short and not particularly sweet.  I played Kev and the scenario called for me to defend a hill.  Kev simply went for all out attack with his Warg Riders and in 3 turns entirely wiped my force out!  We had an odd number of attendees so Alan played Kev next and there was no time for a third round. 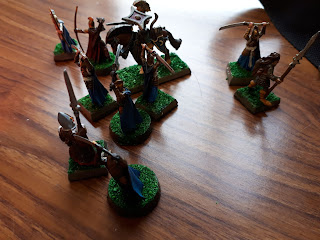 100 % casualties
I did manage a second game.  After our day out at the Wartime experience event we attracted a new member and her young son.  I too the lad on in a game of Wings of War and am afraid I showed him no mercy shooting down his camel in even less time than it had taken in my first game. 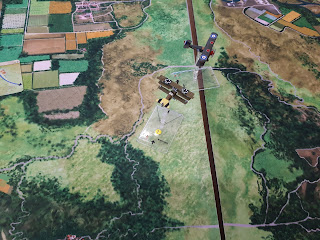 Closing in for the kill


That was my gaming for the night.