Wargames at the National Museum of Flight

Following on from  the successful event at the National Museum of Scotland in support of their Viking exhibition (see report here http://leadwarriordavek.blogspot.co.uk/2013/03/real-public-participation-wargaming.html) the organisers of the Wartime Experience http://www.nms.ac.uk/our_museums/museum_of_flight/whats_on/wartime_experience.aspx have decided to repeat the experiment.
This has only been confirmed in the last week so details may change but at the moment it looks as if three participation games will be put on.  The Falkirk club plan to do WW1 air with Wings of War and WW1 naval recreating part of Jutland.  SESWC are also on board, possibly with a Bolt Action game.  I will post updates on the blog as we have them.
The only real downside is the date, which is Sunday 12th May, the day after our Carronade show in Falkirk.  This will inevitably reduce the number of club members able to take part.  However we are very much committed to building an ongoing relationship with the Scottish Museums to spread the word beyond the normal confines of the hobby so agreed to participate.  It is also great fun and we get to see the event and museum as well.

Best game of Dux Bellorum yet!

It is quite a while since I have had a game down at the club with John who has been very FOG centric for a while.  He fancied playing something different last week so we had a straight 32 point game using 60mm base widths  on a 4x4 table.  It was a reasonable game and we said we would have another go soon.

Unexpected circumstances resulted in a last minute change of plan on Monday and we had another go, using the same armies.  Mid era Welsh warrior on my side (including monks and a stampede) against mid era Saxon warrior.

We decided to go for a scenario and agreed on 'End of Reign' .  This was an excellent choice as it made us think about our deployment and involved a lot more jockeying for position.

John was much more aggressive with his generals element - I wimpily kept mine out of harms way all game as in this scenario LPs cannot be used defensively in melee by the companions.  Despite John winning most of the combats I managed to come out on top with a last minute suicide charge by my javelin armed mounted skirmishers with 3 attached aggressive LPs.

Definitely my best game of Dux Bellorum so far.

One rules query I need to follow up on.  I kept my cows to the rear, relying on the fact they move as if foot skirmishers and foot skirmishers can interpenetrate any friends.  John thought it seemed a little strange that I could charge my stampede through my warriors (or even with another army shieldwall) and I agreed  so ended up not doing it.
Posted by David at 16:40 No comments:

I have signed the pledge!

There seems to be a lot of hype about kickstarter around at the moment and so far I have stayed well clear.

However my Tudor project continues to rumble on in the background and this seemed too good an opportunity to miss.  I am also interested in getting hold of a copy of the rules as well

Will I catch the kickstarter bug?
Posted by David at 14:55 No comments:

The National Museum of Scotland hosted a small wargaming event in support of their current Viking exhibition on Sunday.  I was there with the Falkirk and District Wargames club (there were 9 of us there in total) doing a large scale Basic Impetus game of the Battle of Cruden Bay or ‘The Slaughter of the Danes’.   South East Scotland Wargames Club put on Viking raid using the Dux Britanniarum rules.  The Edinburgh Hub partnered with 6s2Hit to present a quick fire game of The Siege of Paris, a one to one game called Men of the Sword, and they also supported a painting area.


This was the first time I had taken part in an event outside of the more traditional wargaming mainstream and I thought it went very well indeed.  Although numbers weren’t huge, perhaps 250 – 300, most seemed genuinely interested.  The guy running the painting table where 28mm Vikings were being painted up, largely by relatively young kids, had about 80 takers and looked pretty busy for almost all of the day.  The Siege of Paris was very popular with the youngsters and only took about a quarter of an hour to play which worked well.  The Men of the Sword table had a good number of takers and the SESWC game also attracted interested spectators.
We ran our game 4 times during the day.  The battlefield was split into 3 zones effectively resulting in 3 separate battles each time.  A club member was available to play each game but was ready to give up the slot and/or assist any member of the public who wanted to have a go.  Although that happened only about a third of the time there was also lots of good engagement with people showing an interest rather than wanting to actually play.  The club had bought some plastic Gripping Beast Vikings and we gave away sprues to those that had taken part.  We also used the opportunity to promote our show, Carronade, on 11th May.
I hope we get the opportunity to do something like this again.  Usually when we talk about public participation games we mean games at wargames shows played by wargamers and their offspring.  It was very good to see an interest being shown by a much wider section of the population and we may have sparked a lifetime interest in the hobby with one or two kids, or provided an insight into what is out there to some of the adults.    The Museum was pleased with the event so we might get an invitation back or to one of their sister venues.  All in all a fun and rewarding day. 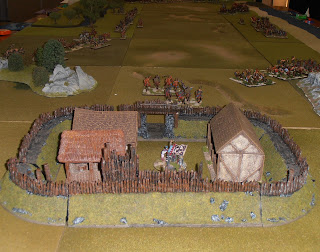 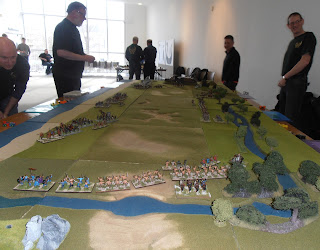 The full table, Scots to the right and Vikings to the left and some of our club members 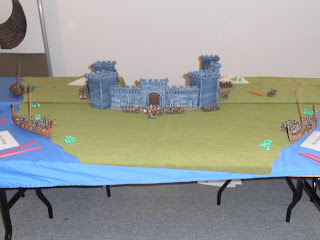 The Seige of Paris, before the Vikings disembark from their ships 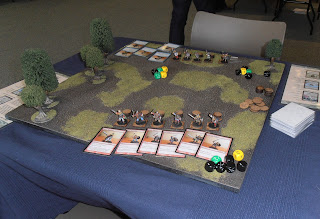 The Men of the Sword gameboard 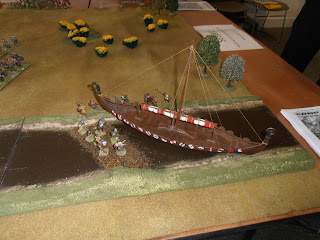 Sunday is our trip to the National Museum of Scotland .  Lets hope the public turns up and participates - wargamers welcome too of course

I will post up an account of how it went.  The link is to the museum blog where club member John has given some more background to the battle and wargaming in general.
Posted by David at 09:54 No comments:

Another one of these ideas that bloggers pinch from each other


Apparently today is Old Stuff Day - no I hadn't heard of it either, but it is a wonderful idea so I thought I'd join in and encourage all my fellow bloggers as well.

So what is Old Stuff Day? Well I'll let Warhammer 39,999 answer that as it was his proposal:

"On this day, each blogger can go through their history and find posts that they’d like to shake the dust off and present again to the community at large. Some suggestions for content that would be good to post:
* Posts that you considered special that didn’t receive as much attention as you thought they deserved
* Content that people liked in the past, but haven’t seen recently * Posts you might have created before your site received much traffic, and now
The posts I have chosen are
http://leadwarriordavek.blogspot.co.uk/2012/01/visit-to-broughty-castle.html
I am not that a good a photographer but these came out really well and remind me of a great day out with my wife Angela
http://leadwarriordavek.blogspot.co.uk/2012/12/historic-battles-two-firsts.html
This one did not get much attention at the time - there are no photos as I was having problems with the camera at the time, but they were two great games
http://leadwarriordavek.blogspot.co.uk/2012/01/support-your-local-library.html
This is one to follow up on - I hit my target of 52 library books borrowed and read last year and have made the samepledge this year.
So what are your favorite old posts?
Posted by David at 11:45 No comments: