What rules to use with Wood Elves

I am just about to purchase a collection of wood elves from a fellow club member, all old citadel stuff.  I will have about 90 infantry, 8 cavalry, 3 hawks/eagles with archer crew and a tree man ent type creature


Forces for Hordes of the Things and Dragon Rampant are very doable but I wondered if anyone had suggestions for other rule sets that might be suitable?
Posted by David at 15:18 12 comments:

Email ThisBlogThis!Share to TwitterShare to FacebookShare to Pinterest
Labels: Elves

First game with the Elves 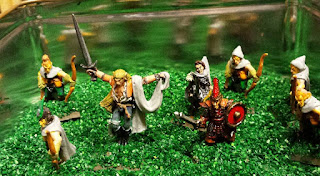 Played my first game of Songs of Blades and Heroes tonight and got taken down by Dwarfs.  The Curse of newly painted figures strikes again  !!!!

Email ThisBlogThis!Share to TwitterShare to FacebookShare to Pinterest
Labels: Elves

I am enjoying painting Elves!!!

At a loose end for a game this coming Monday I posted up on the club facebook page looking for an opponent.  Tim replied.  I know that he is a fan of Songs of Blades and Heroes and as this is a system I have not yet played I suggested this to him.  He was happy to oblige with an introductionary game and sent me some info through.


A starter force is only half a dozen models so I thought that I might have enough figures in my “stash” for a wood elf band.  Sure enough I found half a dozen plastic GW archers in need of a bit of a repaint, a couple of  metal figures of unknown origin in need of a touch up and a nicely painted dark elf (a little on the small side) who can be drafted in as a leader.


Last night I spent a happy hour applying paint to the figures.  Those of you who know me will recognise this as an unusual occurrence.  To me painting is a necessary chore rather than a pleasure.  I do get a good feeling once having completed a figure (however imperfectly) but the act itself is not one I particularly enjoy.


However, for some strange reason, painting the elves last night was a great experience.  Perhaps it was a one off but today I feel enthusiastic about expanding my elf collection (about 25 high elves, 12 dark elves and 8 wood elves) into full army sized forces.  As well as potentially SOBH I am thinking Hordes of the Things, Dragon Rampant and Chaos Wars.


I am not foolish enough to start buying masses of new lead or plastic.  One of my problems is that the transition from bare metal to finished figure always seems a long and daunting one.  My plan is to scour the bring and buys at shows for (cheap) painted and partly painted figures and bring the armies together over a period of time, looking for opportunities to find games I can use them in as I go.