The National Museum of Scotland is holding a Viking exhibition which runs until 20th May.  However the most important date for your diary is Sunday 10th March when they are hosting a ‘Viking Wargames Day’.  A number of clubs will be putting on games.
More details on the exhibition here
http://www.nms.ac.uk/our_museums/national_museum/exhibitions/vikings.aspx
The Falkirk club is recreating The Battle of Cruden - or the "Slaughter of the Danes" from 1012.  This saw Malcolm II lead his Scots army against invading Danish Vikings led by none other than Canute, then Prince of Denmark. The result was a bloody draw but a strategic victory for the Scots.
We will be using a slightly modified version of Basic Impetus.  The game is designed to be accessible to members of the public who may have little knowledge or experience of wargaming.  They will be able to take control of a command and will get to roll some dice.
Please pass details on to anyone who you think might be interested.  We don’t often have such direct access to the non wargaming public so I do hope it will be a success and might even attract some new people into the hobby.
Posted by David at 13:16 2 comments:

I like to try and visit other clubs from time to time and had the opportunity this weekend for a trip down to Dumbarton.  Thanks to the members who made me feel welcome and my opponent Andy, with whom I had an enjoyable game of Great War.

The club meet at the Masonic Sports and Social Club on Church Street where they hire a large hall.  They have the use of it from 17:00 to 23:00 which allows for a good session. If you live anywhere near it is certainly worth a look at.


This was only my second game of Great War and Andy had not played for a while so we were a bit rusty with rules, but managed fine.  My limited number of German late war figures means that I have to emphasise quality over quantity so I used 2 stormtrooper companies with support from 2 machine gun sections and a flamethrower team.  Andy fielded a 1918 BEF list with three companies supported by two machine guns, a mortar section and 2 18pounder field guns.  It looked as if I was outnumbered by about 2 to 1 and with the British having 2 Lewis guns per platoon I felt rather outgunned as well.  The objective was to take the hamlet in the centre of the table.
Andy got the first move which was not in the plan as I had hoped to get smoke down to cover a rapid advance using infiltration tactics which gives an additional (variable length) move.  The two platoons on my left were pretty much caught in the open and taken out by the company opposing them, supported by one of the field guns.  It was a disaster of a start.
My second company had benefited from more cover and was able to sprint forward in the centre and soon took shelter in the nearest building, which they were to occupy for the remainder of the game.  My two machine guns, sited to the right of centre, kept up a heavy weight of fire for most of the game.  They took out the other 18 pounder and the mortar which was caught trying to reposition itself.  Further damage was done to the British company on my right flank.


To my furthest right I had deployed the flamethrower team.  They started in the cover of a hill and fortunately I was able to get some smoke down to cover their advance to the crest.  Emerging from the smoke they were able to get in two phases of fire, taking out one company and distracting another which was as much as I could have hoped from them.
As the game drew to a close a pretty much unscathed British company was streaming around my left flank.  I had managed to keep a toe hold in the village but was really down to one platoon and the machine guns which were now looking exposed in the open.  I am sure if the battle had continued much longer it would have resulted in a British victory but my occupation of one of the houses allowed me to claim the narrowest of wins


Thanks again to Andy for a great game which I hope we will be able to repeat sometime. 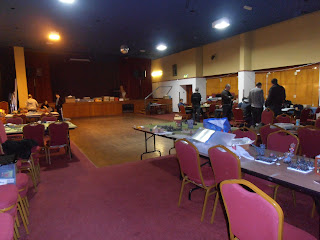 The Hall which is a very good size indeed 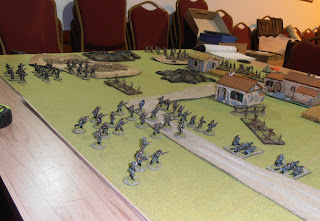 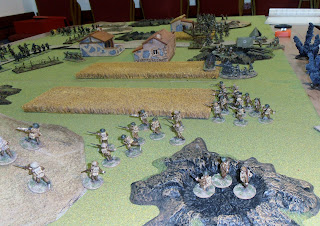 The British on their left, with no visible enemy to their front at this stage 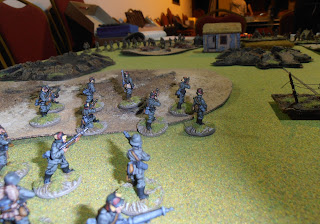 The doomed left flank stormtrooper company just about to get mown down
Link if you are interested in finding out more about the Dumbarton club http://dumbartonwargamesclub.webs.com/
Posted by David at 12:37 1 comment:

Alarm clock set to 4:00, to the train station to pick up the coach at 5:00 and off we went.  Including one independent traveller and 3 club members on a trade stand that made 28 from the Falkirk club, about 75% of our membership, which was a good turnout.

We arrived in time to pick up the free figures - I quite liked the call 24 figures over here! - and we then hit the show.

My plan was to play games rather than spend money and I managed 3,  The York club put on a visually appealing and well set up 28mm Pegasus Bridge game which I enjoyed.  Later ona I spotted a naval participation game being put on by Mongoose using the Victory at Sea rules, in which I took the part of the British Navy.  Finally I took the part of Jack the Ripper in an Empire of the dead demo game.

I was unable to fully resist purchases with the fleamarket offering up some tempting delights.  My purchases include a couple of carts, both nicely painted, some saxon infantry and 35  Chaos Warriors.  I put in a cheeky offer for a very scruffy 25mm Late Roman Army and on reflection was quite glad that it was not taken up.

The only thing that I was nearly bought from the trade stands was the air war rules Check Your 6.  I will probably pick these up at Carronade.

The journey was long but I sat with Rory both ways and we had a good natter setting the world to rights.

We are planning our next trip, possibly Sheffield or Leeds. 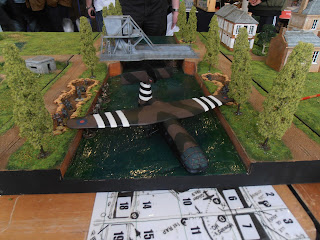 My first glider landed in the water 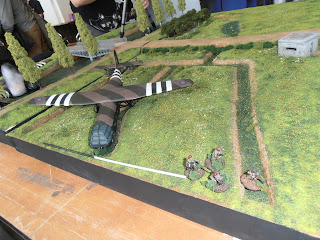 The second in a clearing 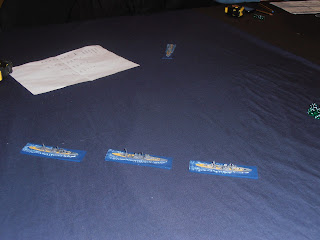 Not a very good shot of the Victory at Sea game 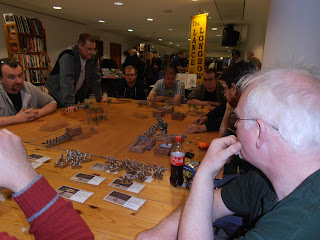 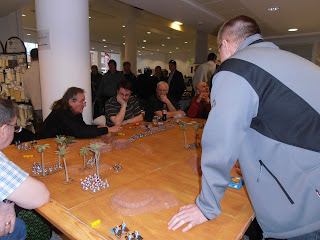 Same game from the other side 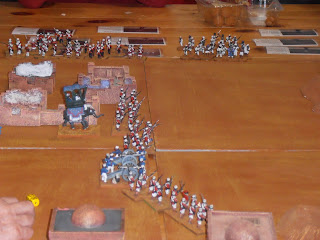 Closer look at some of the figures 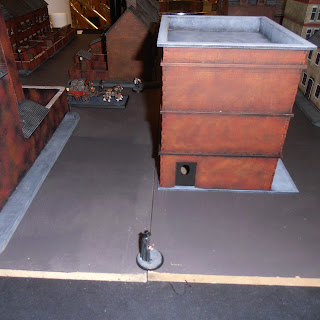 Jack the Ripper ready to start his dastardly deeds 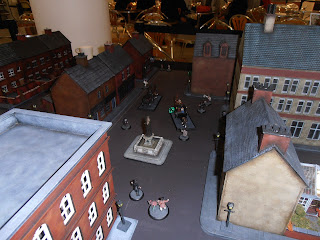 The unsuspecting streets of London 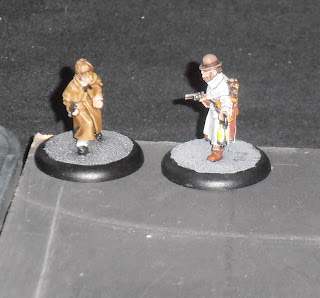 Holmes and Watson about to try to protect the citizens 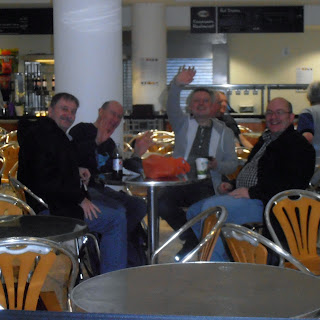 Another one of the attractions (yes I mean the canteen)


All in all a 'Grand Day Out'.  Thanks to the York club for putting on such a good show.