2017 was an excellent year for gaming.  110 games are the most yet since I got married (back in 1982) and probably more than I ever managed when I was single. A highlight was taking part in 3 Iron Man competitions where all armies are provided and all opponents are historical. Thanks to Whitley Bay 3D gamers, Darley Dale WRG and Glasgow and District Wargames Society for hosting.  All excellent games.


Many grat games were played under the auspices of Falkirk and District Wargames Club – too many to mention individually I am afraid.  Our Carronade show was an outstanding success again.


I set myself a painting target of 100 and managed…..4….. However this only includes those started as bare metal.  I have a substantial stash of pre-loved figures and including those that I got into full table ready condition the total rises to 269 so that is not so bad

Email ThisBlogThis!Share to TwitterShare to FacebookShare to Pinterest
Labels: 2017 plan

A multiplayer game of Coastal Patrol at the Falkirk club tonight.  The Germans were attempting to guide a blockade runner and a damaged U Boat into Brest under the escort of a couple of S boats and a minesweeper.


Two pairs of British boats, one pair MTBs and one MGBs waited with their main engines off trying to spot the incoming German ships.  The S Boats charged at full speed at the MTBs scoring a number of hits (on low probabilities) but nothing fatal and as they got very close both were sunk by accurate British fire.


The merchant ship, U Boat and minesweeper all made fairly sedate progress and initially engaged the MGBs giving and receiving minor damage.


As the night drew to a close a number of torpedoes were launched resulting in evasive manoeuvers.  The merchant ship took the opportunity to ram an sink and MGB that got too close but ended up in the path of two torpedoes one of which sent it to the bottom.


A good game which confirmed my enjoyment of these rules which I hope to play again quite often.  Sorry no photos tonight
Posted by David at 23:13 2 comments: 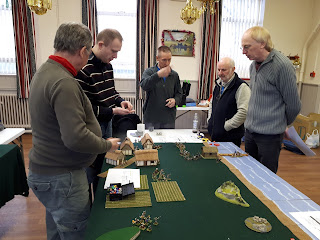 My annual visit to Washington Wargames Club coincided with their Christmas game.  I number of Viking warbands had got wind of a treasure trove being stored in a Saxon church and were all bent on claiming it for themselves

The Saxons proved tougher opponents than expected and none of the Vikings managed to reach the church.  I was the last to arrive and decided to take advantage of the earlier arivals and relieve them of some of their booty.  Great fun 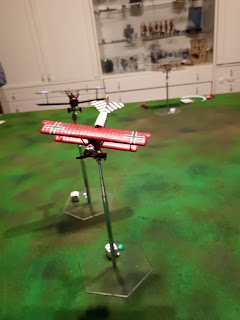 Another new set of rules from the Piquet stable.  Tried a couple of games on Thursday night with Doug and Tim.  Card driven and roll offs using D4 to D12.


In the first game my Fokker was ignominiously set on fire by the rear gunner of a RE8 but managed, in true wargamer style, to fly off the table before it proved fatal.  In the second game I took the RE8 but got nowhere near the action as the scouts battled it out.


Definitely worth another go and the rules are on order from Lancashire games.  Unfortunately they had a sale on so I ended up ordering Pulse of Battle, Archon and the Fantasy version of Piquet as well.  I blame Tim...

Email ThisBlogThis!Share to TwitterShare to FacebookShare to Pinterest
Labels: Jump or Burn

Raid on a Pakistani airfield 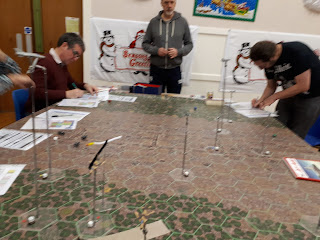 Apologies for another poor photo - I will try harder in future!


Check Your 6 Jet Age  game at the Falkirk club.  I was helping defend an airfield from an Indian raid.  Tim managed to knock down a couple in his first game but I lost one of my Sabres.   Always a fun game