Battle of The Nations Monument Leipzig

Leipzig, the "Battle of the Nations" was fought between 17th - 19th October in 1813.  A memorial to this decisive victory against Napoleon was long planned and finally came to fruition for the 100th anniversary of the battle in 1913.

Prussians and Austrians fought  the allies (along with Russians and Swedes) and Napoleon had a contingents from the Confederation of the Rhine and Saxony in his army(together with French and Polish).  About 5000 Saxons changed side part way through the battle. Post German unification this was considered a particularly poignant battle as Germans fought and died in large numbers on both sides.

Hitler used the monument as a symbol of German pride and there was a move to pull it down during the communist era.  It survived as it was felt to be a good example of Russians and Germans fighting as comrades in arms.

We only had a chance for a short visit and work is being done on it for the 200th anniversary of the battle in 2013 but hopefully the pictures will give an idea of the scale. 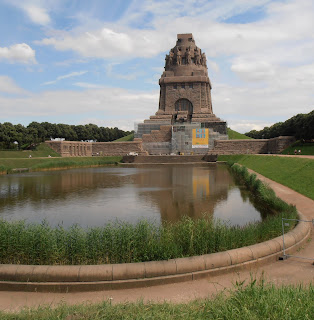 Long view with artificial lake to the front 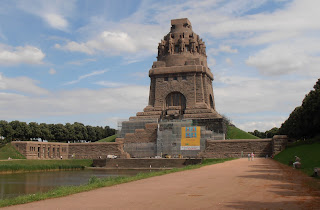 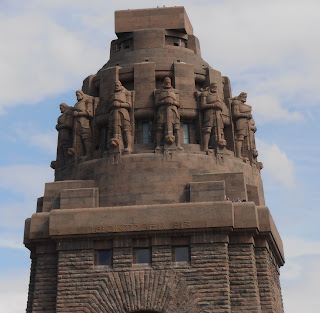 Close up of the statues near the top of the monument
Posted by David at 19:57 1 comment:

The Soviet War Memorial in Berlin

I got the chance to visit this on a stop at the Brandenburg Gate.  It was built in 1945 with rubble from the nearby Reichstag and commemorates 2000 Soviet dead in the for .  It ended up being in the British sector but still had a ceremonial guard of Soviet troops throughout the cold war.

I found it quite impressive.  The centrepiece  is a large statue of a Soviet soldier set atop a semicircular set of arches The area in front has two 152mm gun-howitzer artillery pieces and two T34 tanks on plinths

I am glad that this has been well maintained by the unified city authorities as the temptation must have been to take it down or at least let it crumble away – West Berliners were not over fond of the monument I understand. 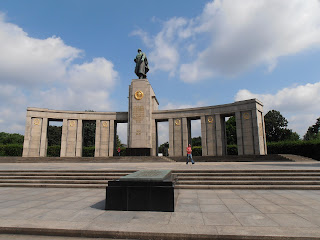 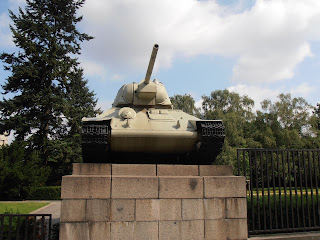 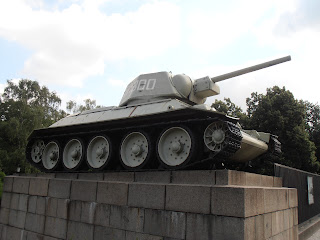 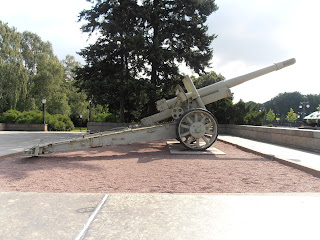 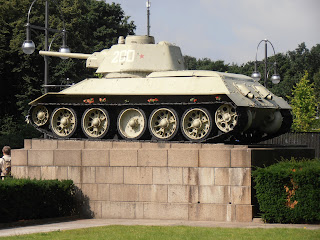 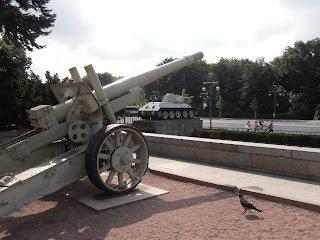 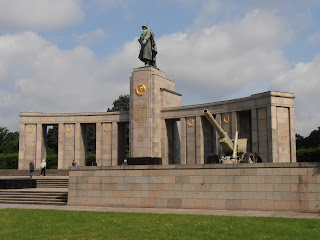 Following the end of the Second World War Berlin which was occupied under the four power agreement between The Soviet Union, , and .  The city lay deep within communist


Prior to the construction of the wall in 1961 3.5m Germans had fled from East to .   During that time border controls had progressively been tightened but it had proved impractical to close the border in itself.  For example it was possible to board an underground train in the Soviet sector and simply get out in a station in .  However by 1961 the transport infrastructure had been put in place to allow to be bypassed by road and rail and the decision was taken to close the border with a significant physical structure backed up with watch towers, bunkers and guards.
In terms of halting emigration the wall was a resounding success reducing it to a trickle.  The damage to the international reputation of East Germany and the Soviet bloc has a whole however was substantial, particularly after the border guards were issued with shoot to kill orders which resulted in between 100 and 200 deaths
The eventual fall of the wall in 1989 is an iconic image of the collapse of Soviet communism Very little of it remains with most of it being physically destroyed in 1990.  The line of the wall has been picked out in brick and snakes crazily across the city.
today is a vibrant, unified city but the fragments that are visible act as a stark reminder of a troubled past. 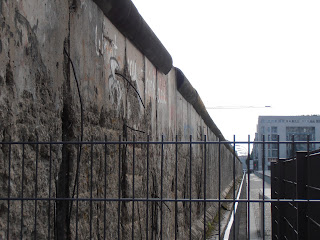 Surviving section - ironically now protected by a fence!  It was generally about 12 feet high topped with a rubber cap to make it difficult to climb over 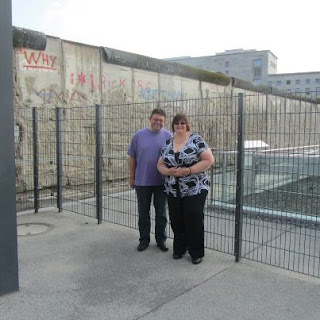 Myself and Angela in front of the wall
Posted by David at 10:18 No comments:

Just back from a 12 day touring holiday of Germany.  Lots of photos to download.  I will do some short posts on the places of interest with piccies over the next few days.
Posted by David at 06:58 No comments:

Welcome to Allan and "biffing the enemy"

Small beer to you mega bloggers I know but......

I hit 1000 page views in a month for the first time in June and am pretty pleased about it!

The big topic for me by a long chalk was the debate over PDF v hard copy rules.  Also featuring were the update on my 2012 master plan and a report on a game of Triumph and Tragedy featuring some strange sounding Ukrainians.

Still only 43 followers which is a bit disappointing and I would like to see a few more comments.  One real bonus however is that I am now following many more blogs and getting inspiration from other wargamers projects.