Now it's not that I don't enjoy board games because I do.  It's just that given the option of a miniatures game and one not involving miniatures I invariably choose the former because that is what I am in to.  Monday was an exception however.  I didn't have a game arranged and my last minute plea for help on facebook provided me with two options.
One was Necromunda the other an unspecified board game.  However the Necromunda game was a run through for a campaign starting in a few weeks time which I don't intend to take part in so it felt a little odd to take that offer up so I plumped instead for the board game.
In fact there was no board as such just cards representing planetary systems which the 4 players had to conquer/occupy with actions determined by dice rolls.  No actual conflict.  Myself Kenny, Stephen and his daughter Charlotte were the dice rollers.  It was quite easy to pick up and good to play something completely different for a change.  Thanks to Stephen for brining the game along and Charlotte and Kenny for being good sports, particularly as I somehow managed to win. 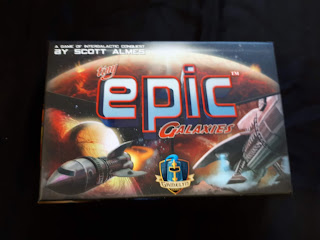 Back to the miniatures for my next game - Inverurie at Claymore
Posted by David at 21:58 No comments:

Email ThisBlogThis!Share to TwitterShare to FacebookShare to Pinterest
Labels: Board Games

A few weeks ago I happened to comment that I had never played General Quarters before and was immediately invited to have a game at the next available opportunity.  I always like to play something new - new to me but not strictly new as the version played ay the club was published in 1975!
The booklet betrays its age but the rules are actually pretty simple and straightforward.  Big guns cause more damage and the closer you are to the enemy the more likely you are to hit just about sums them up.  Gun game with the lads although for once (recently) my dice luck wasn't really in so the IJN had the edge over the USN. 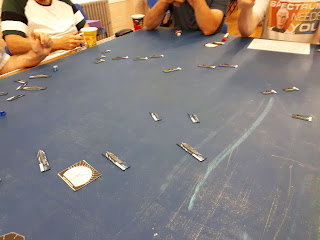 Shot of the action