I had a game of Advanced Songs of Blades and Heroes at the Falkirk club on Monday.  Richard had worked out a neat scenario where my Wood Elves were attacking a dwarf siege tower in an attempt to destroy it. Any elf in contact with the tower would give it one fire point on a successful activation with 10 being enough to destroy it..  However there was one young dwarf at the top of the tower who also had the possibility of being able to douse the flames.


We took 400 points each.  I indulged in a little long range shooting with my 2 Longbows which drove the dwarves into cover behind their protective earthworks.  I then charged forward.  The real hero was a master duellist.  Richards leader was able to group the 4 other fighters and move them as one and the duellist engaged them for several turns with many deft parries.  Although he fell in the end he had bought time for his fellow elves to close with the tower and start to set it alight.  It was touch and go for a while but eventually the Elves were successful. 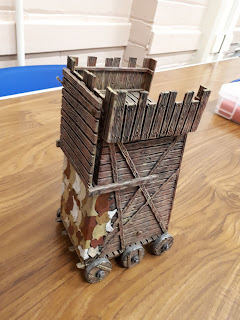 Email ThisBlogThis!Share to TwitterShare to FacebookShare to Pinterest
Labels: Elves, Songs of Blades and heroes 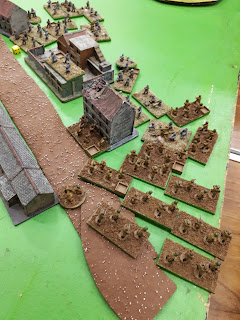 WW2 on Monday – my first game of Blitzkrieg Commander, hosted by Andy with myself taking the Soviets and Leigh the Finns in 10mm.  I am interested in acquiring some 10mm WW2 forces.  In many ways I prefer 28mm but the scale does not work so well for armoured forces.

Having said that this was largely an infantry affair with the aim being to take control of a central town.  The commissars urged the men forward and there was soon a sharply contested fight on my extreme right flank.  I thought that things were not going too badly until I realised that any even relatively short push backs would take my troops off table and out of the game.

After that I managed to hang on and cause some casualties, helped by a Finnish pre planned artillery strike which landed on his own troops.  The Soviets just kept some forces in  the town so it remained contested but weight of casualties meant that it ended up a major Finnish victory.

I will keep a look out for a copy of the rules and anything usable in 10mm on the Vapnartak flea market. 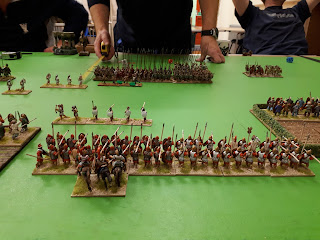 I had an opportunity to play L'Art de la Guerre in 25mm at the club tonight so was happy to give them a go.  I had been told that they are very much a derivative set and so it proved - nothing new and exciting in them but potentially a solid game that might prove worthy of further play.

The game was 3 v 3 and moved a little slowly.  I held the centre of the Cartheginian line with my veteran Africans and Gallic support. The approaching Seleucid phalanx had slightly better combat values so the idea was to let them move between the two bits of terrain with them hopefully exposing their flanks to a double envelopment.  Howver as the night wore on it became clear that if I wanted to throw any dice I would also have to advance.  The resulting clash was indecisive if marginally against me and the overall game was declared a draw.

I would play again and I could provide 25mm armies to do so.  The issue is lack of availability of the rules.at the moment as they are currently out of print whilst remaining much sought after 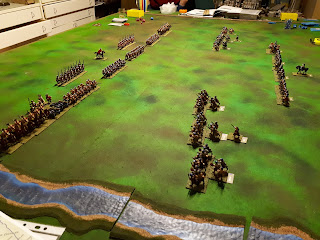 Called over to Tim C's tonight for a game with his shiny new 28mm armies for the '45.  We played Prestonpans with me taking the Jacobites.


Initially the charging clansman on the flanks were largely ineffective with the left flank Government cavalry being much more successful than their historical counterparts.  My plan had been to roll up the flanks with the highlanders and then move the Lowlanders in the centre up to complete the attack.  However with the balance of the battle against me I had to make one last desperate central push which paid off and was enough to win the day.


Very entertaining game which swung backwards and forwards throughout the evening.  My first game of Cartouche.  Thanks to Tim for hosting 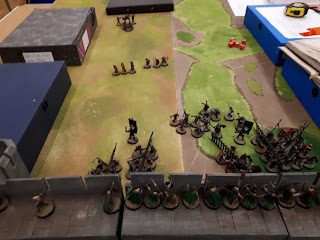 The Christmas break was much extended this year – I missed the last game at the club last year and did not get any games in between meetings hence a long long time with no gaming.
Kev broke out his LOTR collection for and we played the attack on the Deeping Wall scenario.  I took the Rohirrim supported by Aragorn, Legolas and Gimli whilst Kev had the assaulting Uruk-hai.


With the heroes defending the wall it was always going to be very difficult for the attackers to go over the top and the only real way for them to win was to blow a section of wall and swarm through that way.  My archers initially had very poor luck and the 3 demolition teams made it quite close to the wall with few casualties.  However when they arrived a shower of spears took out the torch bearers who had the best chance of setting the charges off.  It was then left to others to try and it took several turns and many more casualties before they succeeded.
By the time the Uruk-hai were very close to their break point and although I had not left many troops at ground level they were sufficient to hold them back whilst more missiles from Legolas and the remaining archers were enough to seal victory,


A fun game where Kev suffered from poor luck – an earlier detonation would have made an evil win much more likely.

Email ThisBlogThis!Share to TwitterShare to FacebookShare to Pinterest
Labels: Lord of the Rings

Having played 100 plus games in the last 2 years I want to keep that up in 2018.  Hopefully this will include SAGA at some of the Iron Man events that enjoyed in 2017 and should allow me a first outing of SAGA 2.


I have some new rule sets to try out, 3 Fantasy sets being Of Gods and Mortals, Songs of Merlin and Arthur and Hostile Realms plus an Ancients set Archon 2.  Not forgetting Empire of the Dead which I bought in December.  Most if not all will require some painting so it will be the Spring at least before they get on the table.


I also want to finish the first round of painting and get some Jason and the Argonauts HOTT games played.  A find in 2017 was Wargaming 19th Century Europe 1815 – 1878 which should allow me finally to get my 15mm South Americans on the table for Wars of the Triple Alliance battles.


Having restarted blogging I will try and post after every game, with a photo when I remember.


One final, slightly unusual, target.  I have always kept some sort of wargames diary.  I find that I have now wargamed in 95 different places so it would be good to get the 100 up this year.  Perhaps a couple of club visits?